I had to say another farewell last week to my precious Dog, who has served me well and taught me much. Sometimes, people need to step away from a lifestyle to take care of themselves, and there is nothing wrong with that. Happening in the same week that I had to say goodbye to Sanjay, however, made me a little emotional, and Dog and I talked a bit about our experience together. He gives me pointers every now and then and we still chat a little. But no more local beer and Chinese deliveries and wallet drainings when I want. Boo.

However, about a month ago, Joe-Pig approached me on Fetlife. He is not local, and most people that message me there are time wasters who are looking for a freebie and don't tribute. Joe-Pig promptly paid tribute when demanded, and we have struck an arrangement. I have him set on a pay schedule, and in return, I degrade and humiliate him while he wears a cutesy pink glass butt plug. So far, it's been very beneficial to both of us, I think. I needed someone who would be pliant and malleable, obedient and prompt. Every Friday, there is money in my account. When I demand a gift card, it's in my email. I needed someone I could be in control of, who is there for verbal abuse so I don't give it to others. People may not understand D/S relationships, but honestly, if someone wants you to take it out on them, and you need an outlet, why not? It's better than hurting someone innocent.

Dog and Joe-Pig are both very different in their interactions, but both have been able to fulfill that domme aspect of me to control and abuse, the need to be adored, fawned over, and spoiled (although there could be more praise for my physical beauty, just saying). It's incredibly rewarding to hear after a session "that was amazing Goddess" or to be told I took him to a level of subspace he'd never been in. Mind you, my interactions are all via text.

Joe-Pig isn't local to me, by a long shot. Some day I hope he would be able to serve me in person. But until then, our arrangement works just fine.
Posted by M at 1:56 AM 1 comment:

This Borg Queen has lost a member of her collective. Last night I had a final oral and fuckfest with Sanjay, aka 3 of 3. He's had an opportunity to relocate with his job and I could never begrudge that of anyone. So, after class I drove to his house (my GPS, I think, is going to start holding a grudge if I can't follow her directions) and he ate me out until I came so hard my soul left my body, then gave me a good hard fuck. I did indulge him in some face sitting, but I couldn't cum that way. He's also a daddy dom, and while  that's not my thing, I treated him to a little daddy/daughter play as a farewell gift. Then he fucked me so hard from behind I skinned my elbow and I have no idea how I actually managed to do that. Like, I lost a good half inch patch of skin. What the hell? I haven't had a sex injury since Number 1 accidentally kneed me in the eye during an over-enthusiastic 69.

I honestly don't know if I'll look for another third. I'm waiting for Cyber Guy to move, and I still have Number 1 at my disposal, plus two subs now (I'll write about my new piggie soon). Only having one local guy now kind of sucks. Guess my glass bf will be getting some use.

Farewell Sanjay, may the customer service centers of New Delhi treat you well. Bangalore was fun while it lasted.
Posted by M at 11:00 AM No comments:

The hardest part of the vampire fetish to reconcile was the blood. I could accept biting and fangs, but I had such a hard time with the blood. I didn't want to drink anyone's blood, and I certainly didn't want to be bitten to the point of bleeding. Blood exchange is risky. So where do we go from there? I would occasionally get filled with that blood lust, and it made me uncomfortable. I mean, a normal person doesn't crave blood in a sexual way, right? Thank god for Tumblr, honestly. I could look at aesthetically pleasing images of mouths, fingers, fangs dripping blood and it helped, immensely. It's such a hard thing to explain, how arousing it is, how satisfying even seeing fake blood was.

This is why I love the Internet. The Internet gives me a safe outlet to explore my sexuality, especially with what can be considered more "deviant" desires like vampirism and blood. I can satisfy my blood lust without actual harm, transmission of fluids, or risk of disease. And, as I've seen elsewhere, I'm not the only one with a vampire fetish. It's comforting.

*That's my favorite place to be bitten due to an old injury that has left the muscles kind of fucked up in that area. I make sure all partners know exactly where to bite me now. :)
Posted by M at 1:00 PM No comments:

You Make Me Want to be A Better Domme

Until recently, I identified as a switch with mild Domme tendencies. Over the last few months, I've realized I need to reclaim myself and embrace my Domme side. About a month ago, I met Dog. Dog, who approached me as a paypig, who was willing to learn and grow with me.

In this past month or so, my precious Dog has helped me discover things about myself, and explore those things. I really like dominating a man. I love humiliating him, degrading him, knowing it turns him on when I rub my feet on his face or roleplay a super humiliating scene. I love that I can meet his needs, but also meet my own needs. I never thought humiliating and degrading someone would be as much of a turn on as it is, but it is.

It's a thrill when I give an order and it's carried out. When I say "I want money, come over with your wallet" or "I'm hungry and placed an order. Go pay for it and deliver it to my house." Opening my email to find a giftcard waiting for my pleasure.
It had been about 6 years since I was last in a D/S relationship, and I was the sub then. But I'm understanding my Dom's side now. I'm understanding that part of me, and it's liberating, especially being in a time in my life where I find it harder and harder to switch and submit to anyone.

Thank you, Dog. You make me want to find new and more clever ways to humiliate you, take care of you, and meet your needs. Your Goddess is very lucky to have such a good boy like you to worship her.
Posted by M at 8:01 PM No comments:

Hypocrite, or "How to Look Guilty"

I mentioned a couple weeks ago I may have a fourth to add to my collective, but that I wasn't holding out hope because he's flaked on me in the past. He did end up flaking on me again and I haven't heard from him since. He and I are Facebook friends and former coworkers. He's engaged. Now, as I've mentioned before, taken or not, I'm discreet. I'm not the morality police, so if you want to cheat on your partner, I won't tell, but I won't lie for you, either. But honestly, one of the things that makes me laugh with derision and also paints a huge "I'm guilty" red flag are the constant postings on his Facebook of memes about loyalty and love, and how strong his relationship is, etc., etc..

If your relationship is so strong, then why do you want to cheat on your fiancee with me? Also, when he posted this image, I think I laughed out loud: 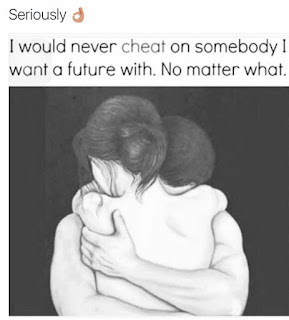 For real, if I was your woman, I would be so suspicious as to why you were posting that. Every time he's talked to me, the next day his Facebook is full of that shit. Dude, you look guilty as hell. You might as well let her log into your account and read our conversations, for real.
Posted by M at 6:52 PM No comments:

I gathered up a nearly-dead pillow, a firmer, cylindrical pillow, and a towel, and started. It felt great. But I wondered what it would feel like with penetration. I've only been on top with partners a couple  times. I always felt awkward. So tonight I put the glass boyfriend in me and went to town on the pillows.

I'm in a weird mood tonight. My Dog even tried to cheer me up by coming over with his wallet, buying me pizza, and some foot worship. As Christmas creeps around the corner, I'm grateful I don't have a significant other because I always spoil and over-spend on them (I was just talking to Number One about this last night as we reminisced about an expensive coffee pot I bought him one year). However, being a cyber mistress to a married man, a fuckbuddy with an ex, a fuckbuddy with an old friend, and a domme to a sub can be kind of lonely (not to mention I probably won't get Christmas presents, which shouldn't be important, but I like being spoiled). I don't want a relationship, I'm too bitter and jaded, but sometimes I want something that is mine. But maybe that's not it. I love the attention and always crave more, but maybe I miss the romance aspect of being in a relationship, not the relationship itself. I actually talk to and have great conversations with all my guys, even Dog when we're out of scene, but I kinda miss... romantic gestures from men. Dinner, movies, random flowers or gifts of my favorite candy, stupid shit like that. Sanjay will cuddle me all I want if I need it, Cyber will call me his beautiful Princess when I want adoration, but there's still a hole. Maybe I can only fill that with a relationship, which I am certainly emotionally not ready for, nor do I care to commit myself to one person any more (but I can't be in an open relationship because I can't share either). Maybe loneliness is my albatross to bear for the lifestyle I choose to lead.

I am a vampire who passes the night hours pondering her existence, a succubus who is always hungry for more.

Good stuff to check out